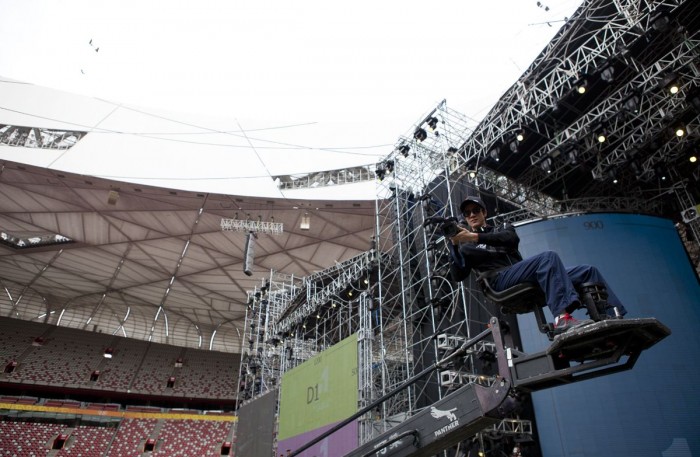 Yes, you heard me correctly. Sometime in the near future you will be able to see Wang Leehom’s “Open Fire” concert in eye-popping, seat gripping, frenzy inducing, 3D!

It has definitely been a long and rigorous journey from idea to execution, but in the end it was well worth it. The Beijing Bird’s Nest concert was a special one. It wasn’t like any of the other concerts on this tour thus far. If I had a to choose one word that would epitomize this concert it would be “epic.” It was epic in scale (guest stars, a more elaborate stage, more dancers, etc.). Epic in a historical sense (First solo pop concert held in the Bird’s Nest). And it was also an epic performance by Mr. Wang Leehom himself. You have to see it for yourself!

Without top notch people helping out in a production like this, things could have easily become overwhelming.  So it was lucky that we had amazing people up and down throughout this production. Without their hard work and skills, none of this would have been possible.

It was a great image seeing my boss at the end of this concert. He had his hand throughout every single step of this process. From the additions to the concert, to the 3D shooting, and even what we were eating for dinner in Beijing. I can only imagine how busy he was during this production. But when you’re doing something that you love, there is no such thing as too much.